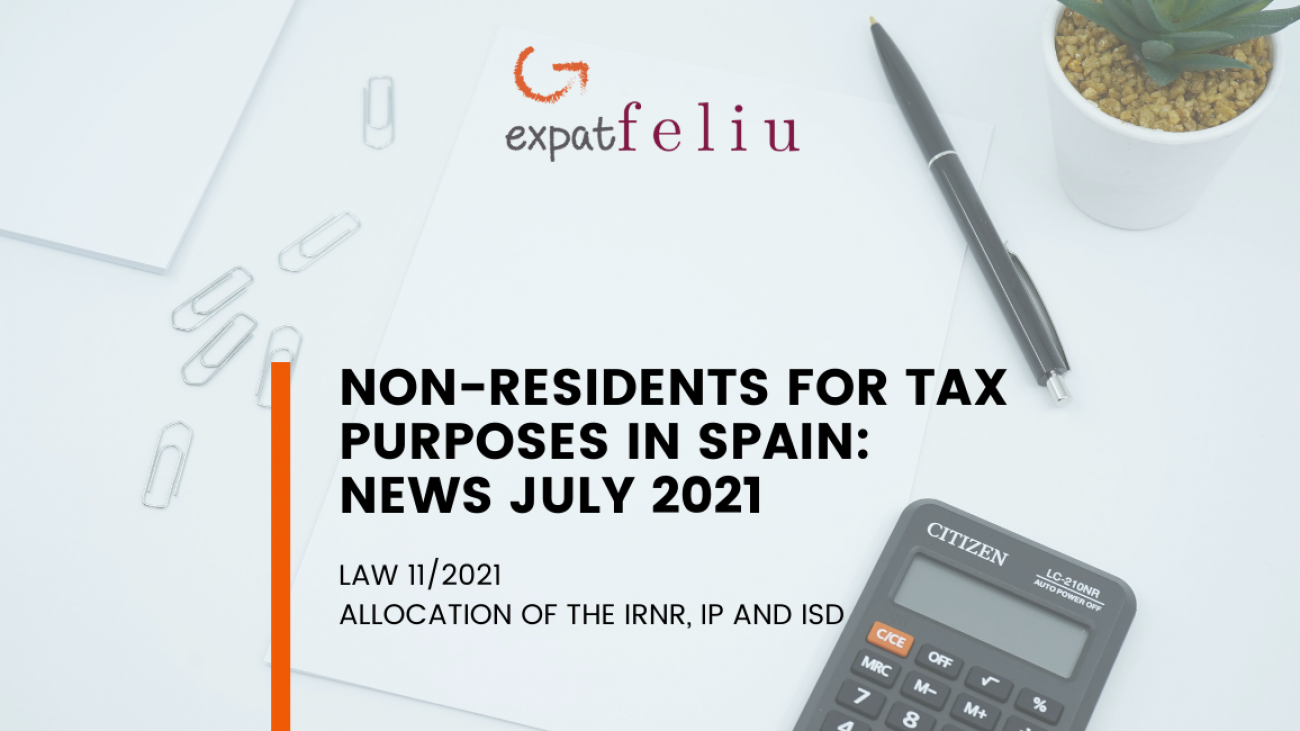 NEWS FOR NON-RESIDENT INDIVIDUALS FOR TAX PURPOSES IN SPAIN: TRANSPOSITION OF THE EUROPEAN REGULATIONS BY LAW 11/2021, SPECIAL AFFECTATION TO THE NON-RESIDENT INCOME TAX, WEALTH TAX AND INHERITANCE AND GIFT TAX.

Within the framework of the existing regulations in Spain for non-resident individuals, we update our blog with the novelties in some of the main applicable taxes, approved through Law 11/2021, of July 9, on measures to prevent and combat tax fraud, also known as "Anti-Fraud Law".

Previously, in this blog, aspects of the so-called «Anti-Fraud Law» have been developed. The link is provided below:

What is the antifraud law?

It is the law that regulates measures to prevent and fight against tax fraud, establishing rules against tax avoidance practices that directly affect the functioning of the internal market, in addition to modifying various tax rules, including those applicable to non-resident taxpayers in Spain.

Its purpose is twofold: on the one hand, it aims to incorporate European Union law into the domestic legislation in the field of tax avoidance practices and, on the other hand, to introduce changes in the regulation aimed at establishing parameters of tax justice and facilitating actions aimed at preventing and fighting fraud by reinforcing tax control in Spanish territory.

What are the main changes in the taxes applicable to non-resident taxpayers in Spain?

The following is an analysis of the main regulatory changes, distinguishing between the different taxes affected:

Changes in the obligation to appoint a representative

Under the current regulations, taxpayers were obliged to appoint a representative resident in Spain when they had a Permanent Establishment (PE) in Spain, regardless of their habitual residence status.

With the new modification, it will be necessary to appoint a representative when:

Changes in the determination of the taxable base of the assets assigned to a PE.

It is specified that the difference between the market value and the book value of the elements assigned to a PE (Public Establishment) in Spain that transfers its activity abroad must be included in the taxable base, when up to now the rule only required the inclusion of capital gains.

This change in criteria will make it compulsory for a greater number of taxpayers to pay tax when they intend to change the tax residence of a PE located in Spanish territory.

In addition, there will be an impact on the computation of the tax period and accrual when there is a change in the tax residence of a PE.

In the previous case in which a PE resident in Spanish territory changes its tax residence, the tax period will end at the time of the transfer abroad, taking into account that date for the computation of the accrual of the applicable taxes (we are thinking of the IS «Corporate Income Tax», which is accrued 25 days after 6 months from the end of the tax period).

IP and ISD: Wealth tax and inheritance and gift tax.

Equalization of tax residents in the EU and in third countries.

The main modification made by the regulation with respect to the international scope is the equal treatment of EU citizens and third country nationals in the application of certain taxes, specifically in the area of IP and also ISD.

Until the approval of this regulation, initially all non-resident taxpayers in Spain had to apply the state regulations, without taking into account the specific regional regulations that could be applicable to them in the case of Spanish tax residents.

Well, by means of Law 26/2014 the rule that contravened European Community law as regards the free movement of capital was modified, allowing citizens resident in the EU and in the EEA (European Economic Area) to apply the autonomous regulation of the place where the highest value of the assets and rights of which they were holders are based. This led to the elimination of discrimination against EU and EEA citizens, but discrimination against third country nationals was maintained.

The present amendment aims to eradicate this difference and to equalize the rights of tax resident citizens in Spain and non-residents.

The elimination of such discrimination could lead to a review by the foreign investor to plan new business or acquire assets in Spanish territory.

If after reading our blog post on «What’s new for non-tax residents in Spain» you have any doubts, you can contact us through the request form or by calling us at 93 875 46 60 and our team will be happy to help you!